This is the trailer for 'This Holding: Traces of Contact' (a 28' film featuring professional dancers, soft sculpture and an original score). Filmed and produced in the early months of the pandemic, This Holding addresses the burdens, anxieties, and hopes of these unprecedented times. This was a collaboration between Jana Harper, Moksha Sommer, and Rebecca Steinberg. It was presented by OZ Arts Nashville.

Video from Performance at the 13th Havana Biennial in Matanzas, Cuba

A collaboration between Jana Harper, Cuban dancer Liliam Padrón and her company Danza Espiral, and singer Moksha Sommer, Cargas is an hour-long performance that addresses the burdens we carry and how through empathy and community we might eventually transform them. During preparational workshops, performers came up with a list of 100 words that describe the weights they experience as Cubans. These ranged from everyday local concerns such as food shortages or caring for one’s family to global issues like migration and climate change. The words were painted on ration bags and carried through the city of Matanzas, from the sacred Ceiba Tree to the Palace of Justice.

Cargas was performed on May 12, 2019 as the concluding performance for Ríos Intermitentes, a project for the 13th Havana Biennial in Matanzas, Cuba.

Sommer has performed and composed full-time as HuDost since 2006 in addition to her solo work. More information is available on the HuDost website, HERE.

Sommer also creates art-based music videos for this project. Here are a couple of recent examples:

Painting- 2019- Presented at the WKU US Bank show in Bowling Green, KY 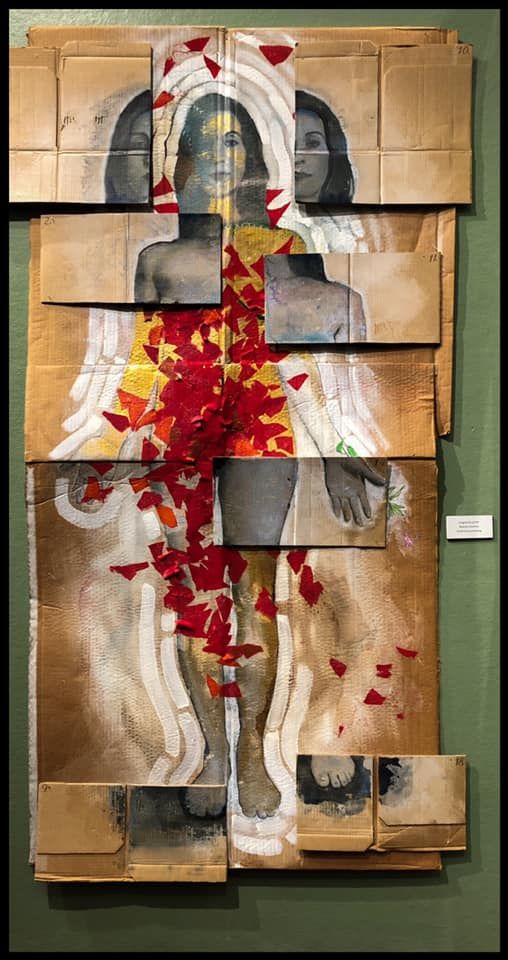 Resonance (Remains)- Sculpture, Painting, Sound Installation, and Live Performance- 2017
This work is a multidisciplinary performance piece and sound installation that examines the purpose of resonance as experience and the reclaiming and reconstituting of habitual practices in relation to the roles of participants and the physical space surrounding them. The piece includes live musical performance coupled with pre-recorded sound installations, live movement, paintings and sculptural installation (using common household objects). The images below are from a very recent performance. Live performance photos were taken by Anthony Pagani. In the coming months I will be doing this piece with participant performers in a women’s prison. 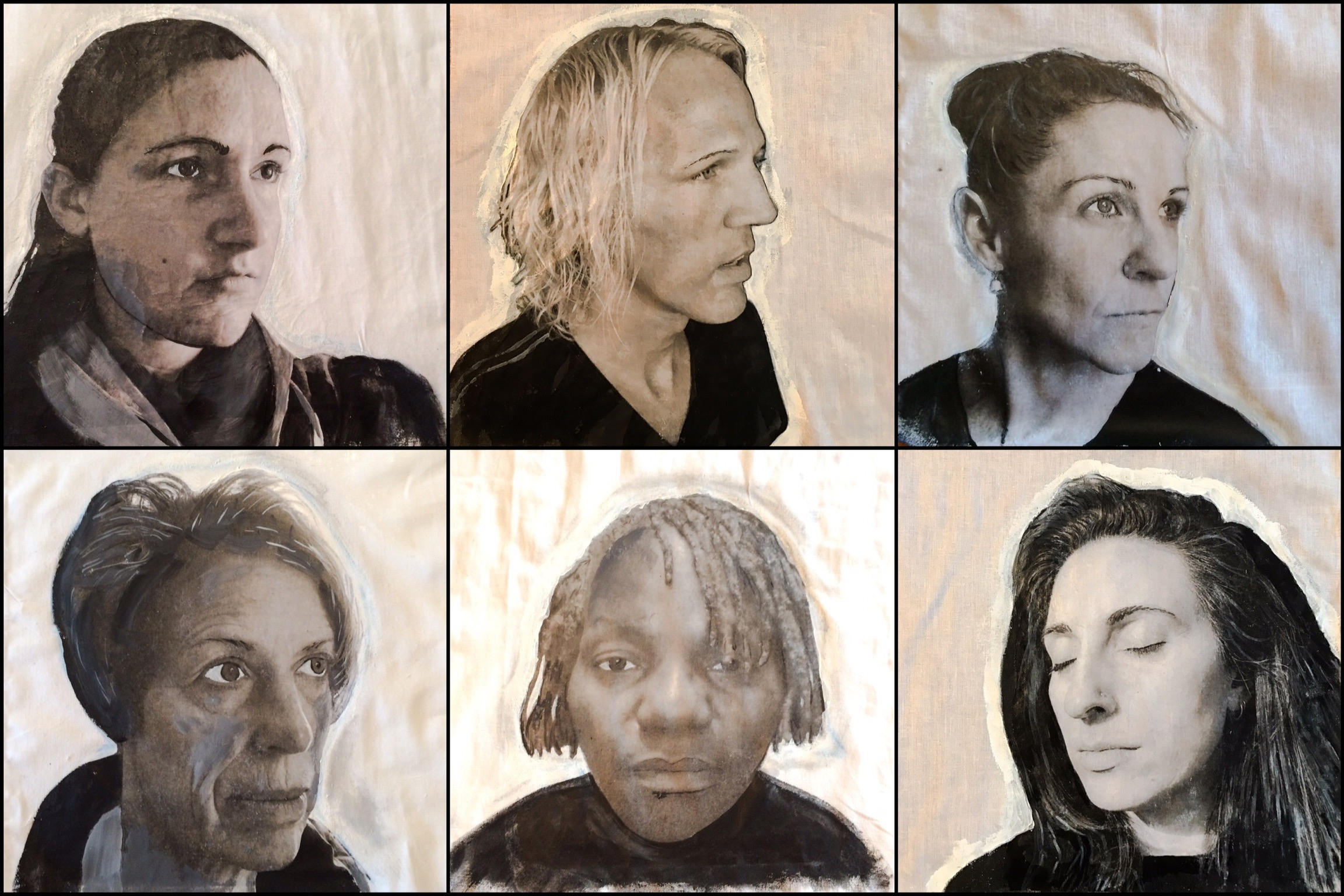 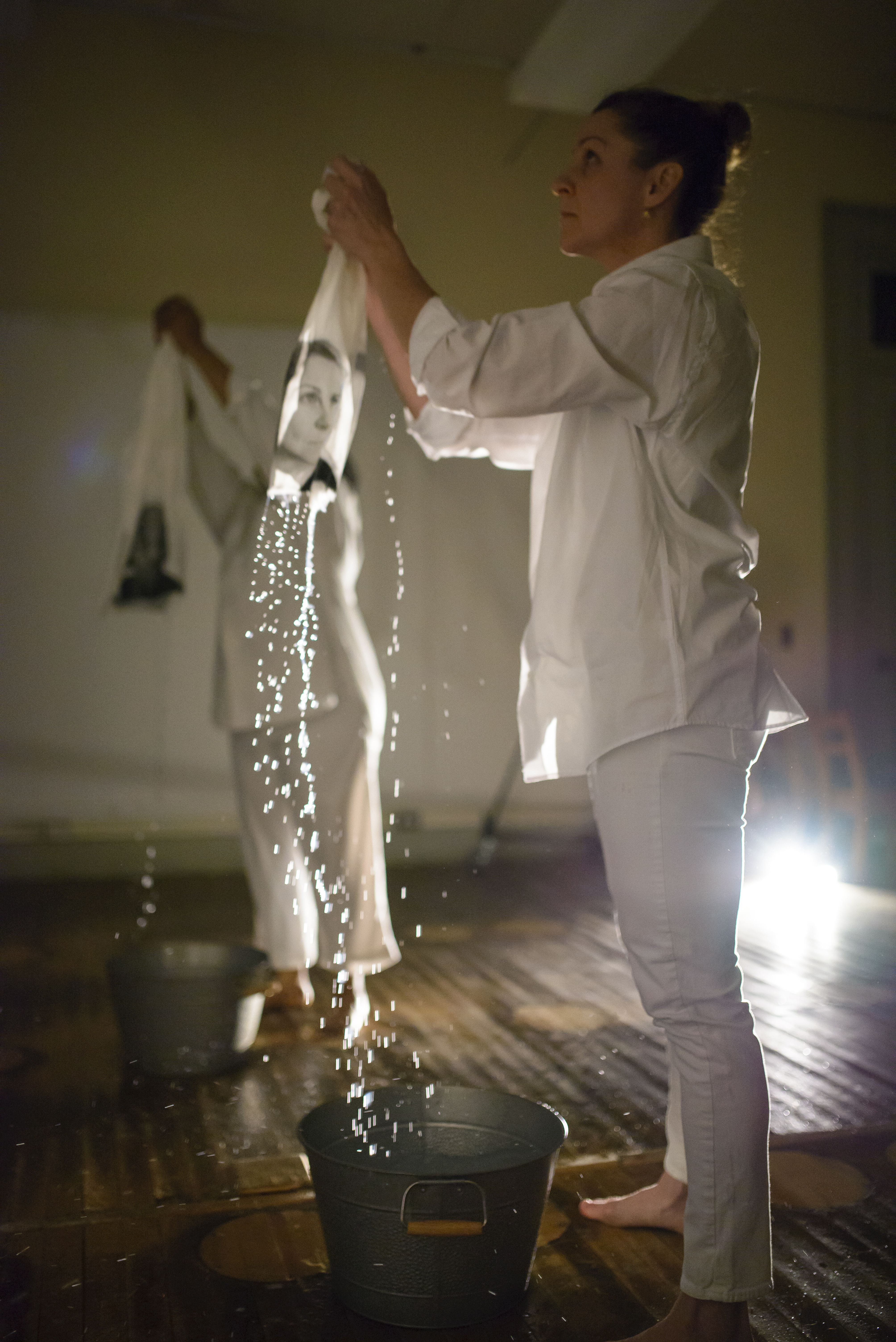 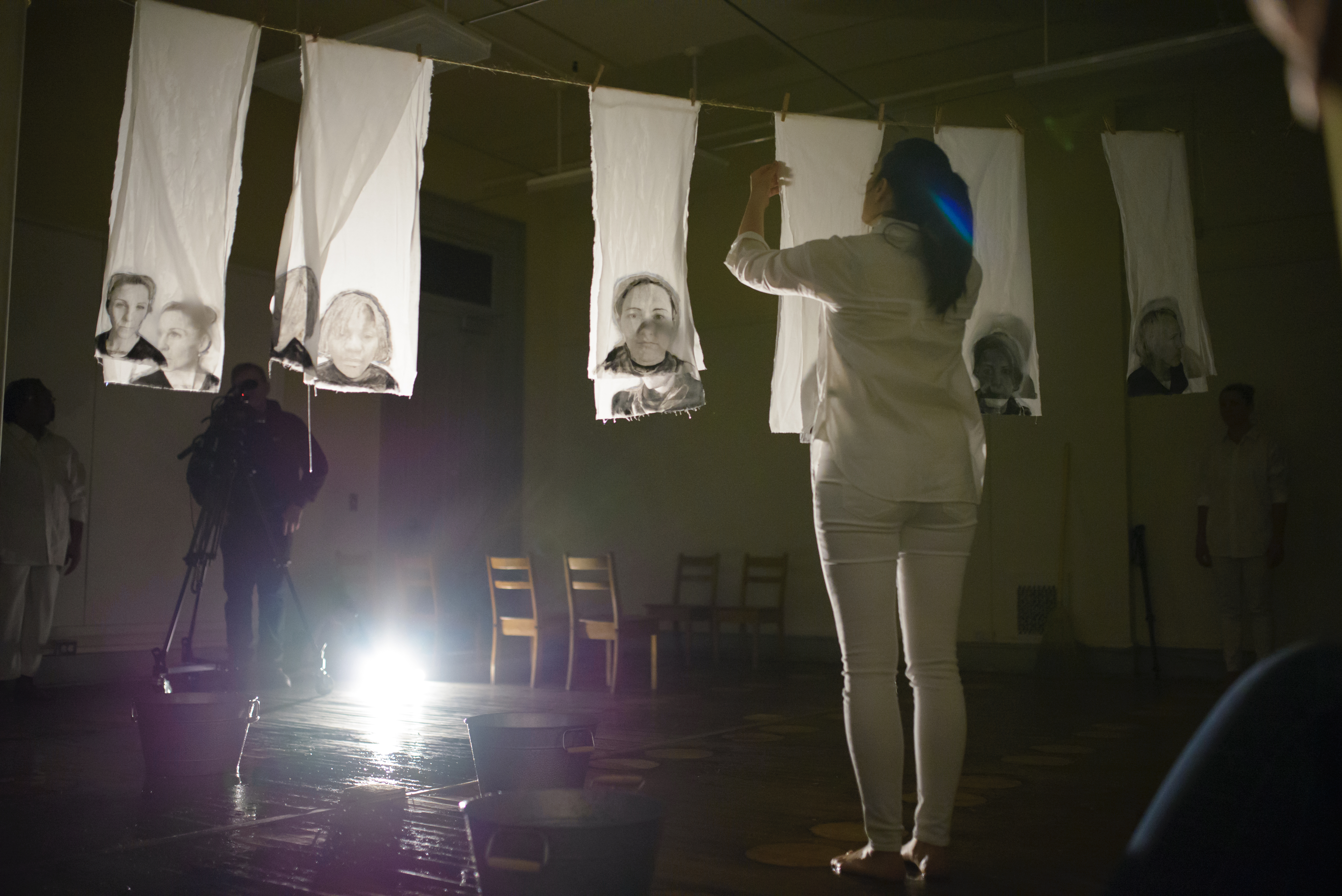 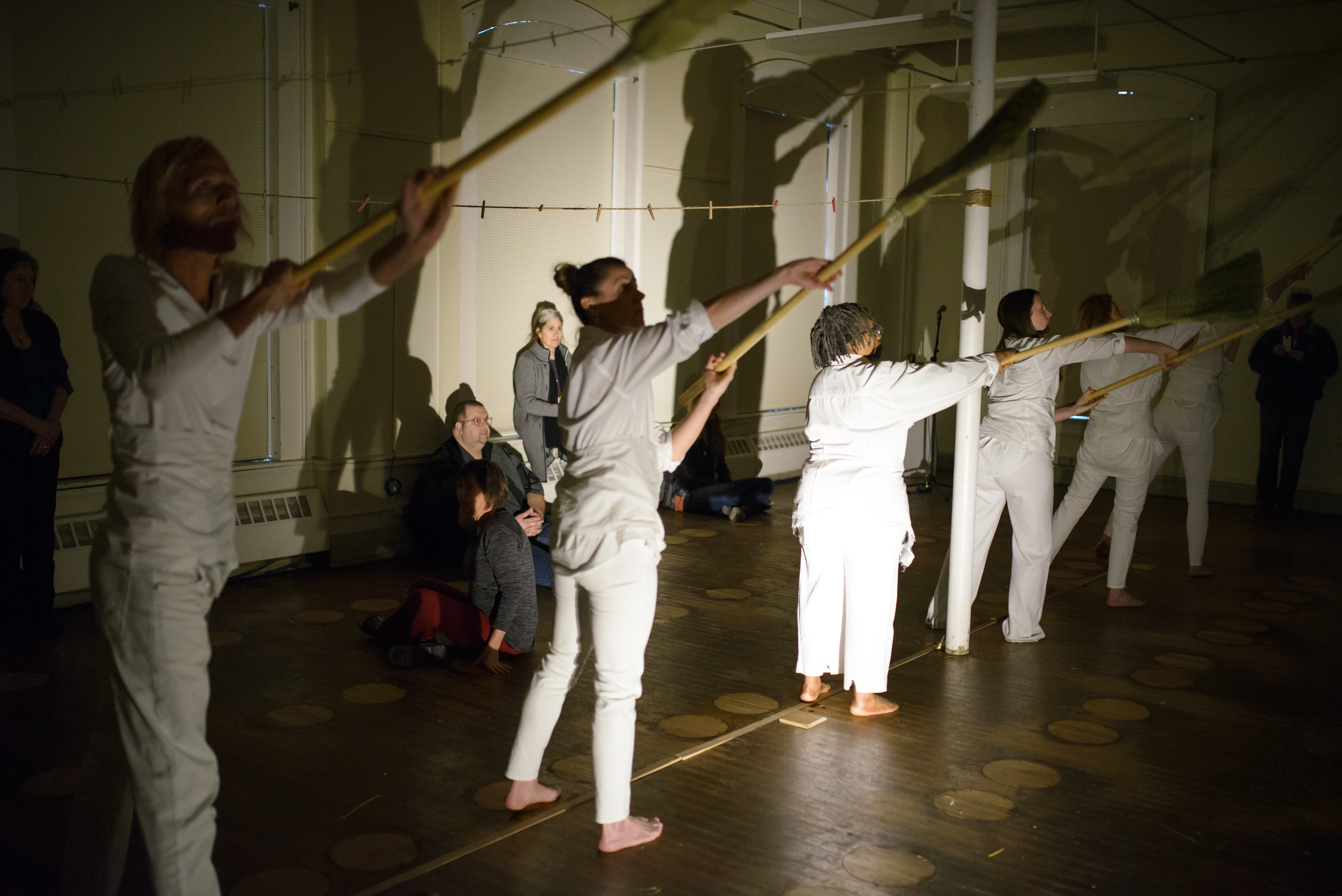 This is a recording of a sound installation/performance piece that I completed in 2016. This piece was presented in total darkness; making it so that as my layered spoken voice told the story of my body, my live-sung performance was looped vocals that filled the space in a blanket of sound. I stationed the audience in a circle in the space. The

This is a recording of a sound installation/performance piece that I completed in 2016. This piece was presented in total darkness; making it so that as my layered spoken voice told the story of my body, my live-sung performance was looped vocals that filled the space in a blanket of sound. I stationed the audience in a circle in the space. The speakers were around the perimeter of the room facing in and I did my live performance from the center of the space. This made it so that the audience was receiving the installation and performance in a highly immersive way and the component of total darkness demanded that they experience the performance with a strong constituent of intimacy. The narrative is in the third person but voices the history of my own body.

‘Her Turn’, is a video/live performance piece. While I performed it at VCFA in that form (as seen in this video), I also created a video version of the piece that stands on its own that can function without the live performance element. The piece includes footage of the featured woman, Tanya, doing the practice of whirling. This practice was originally established by Jalāl ad-Dīn Muhammad Rūmī who lived from 1207-1273. He remains known as Rumi and his poetry continues to be highly valued. Whirling is one of the practices in the Islamic faith that women were originally permitted to practice in equal stride with men. Rumi himself had both female and male students and welcomed women into the fold. It was after his death that this was questioned and women, in some lineages of the tradition, were banned from practicing. In certain parts of the world it is only now that women are reclaiming this tradition. ‘Her Turn’ addresses that reclaiming in a subtle way. The song that I chose to include as the live musical performance in ‘Her Turn’ is my rendition of the first verse of the Mathnawi (Rumi’s main work, his ‘Mathnawi’ was composed in Konya and continues to be regarded as one of the peak poems of the Persian language). This verse speaks of the pain of love, the ache of separation, and the essence of longing. In my desire to address the current role of women reclaiming spiritual practices, I included audio of Tanya speaking about the practice of whirling and reading one of her own poems. In creating ‘Her Turn’ I hoped that the pairing of the old tradition done at this time by a woman (the video portion of the work), with a live performance of traditional verse done by a woman (me), with the current contemplations on this tradition voiced by the whirler, could render the necessary harmonious juxtaposition to give voice to the purpose of the work.

This is an audio piece I co-produced with Carma Jolly that was funded by CBC national radio. It was also broadcast on NPR (2010). This piece is a tapestry of interviews, my musical pieces, and a moment-by-moment description of the process of preparing for brain surgery. You can listen to the full program HERE on WAMC:

This is a recording of the audio portion of a sound and visual installation done as a portrait of a man named 'Taruno'. Taruno’s story was undeniably lucid. He had come from a household of abuse where he had begun consuming large amounts of alcohol before the age of 10 and would often blackout into sleep. He was sexually abused by his mother,

This is a recording of the audio portion of a sound and visual installation done as a portrait of a man named 'Taruno'. Taruno’s story was undeniably lucid. He had come from a household of abuse where he had begun consuming large amounts of alcohol before the age of 10 and would often blackout into sleep. He was sexually abused by his mother, raped by a mentally handicapped neighbor (his parents knew about this and chose to do nothing), and went through addiction that manifested in a multitude of ways; as alcoholism, drug addiction, sex addiction, and more. His turning point was when he was working in a hospital and stealing medication. He almost died from the level of abuse that he was subjecting his body to. His stealing was discovered by the hospital and, astonishingly, what they offered him was rehab. At this crucial point Taruno experienced a God-like vision and radically shifted everything in his life. After recovery he went back to school and became a therapist for people with addiction. In the interviews that I did with him he shared all of this information in great and disturbing depth and also spoke about treatment methods that he utilizes for current patients which deal with addressing trauma locked in the limbic brain and tactile, multisensory methods that can treat those traumas more effectively than psychoanalytical processing. I edited these interviews down from a few hours of material to three segments that were an average of 15 minutes each. For the presentation of the piece, in a private room in the exhibition space, I placed a bed, a wooden school chair, and a ladder. The room was lit by a single light bulb suspended above the ladder. I composed a sound piece comprised of several layers of my voice yielding an unending wave of hypnotic sound that also had momentary sections of standard lullabies. This sound piece radiated from under the bed while Taruno’s voice came from three separate sources speaking different parts of his story. If one stood in the center of the room one would hear the music but be unable to discern what the voices were saying. In order to hear the different segments one had to sit in the chair, lie in the bed, or climb the ladder. The textiles used in the room were bought from Goodwills and smelled dingy. This piece played a great deal upon the viewers discomfort with what they were encountering, the lulling provided by the music, and the inherent oxymoronic play between repulsion, empathy, and hope.

I See You- Sculpture and Painting- 2016
This piece was a re-examination of self portraiture and allowing the audience to be part of the portrait. 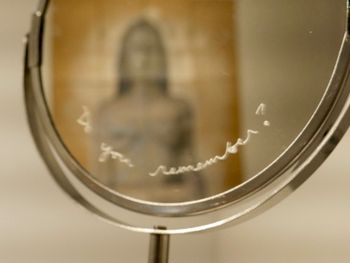 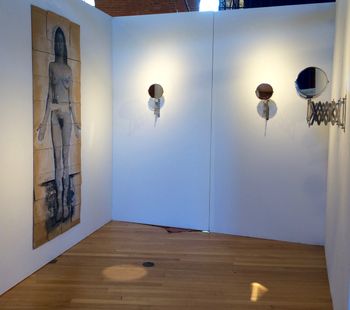 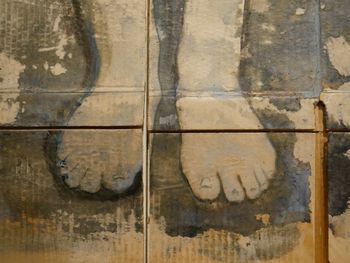 The Voyage of my People- Sculpture and Live Performance- 2013
This piece addresses what it means to have a splintered ancestry. The sculpture remained in exhibition for two weeks and during that time I did several performances. The performances would alter the soundscape that was paired with the sculpture. 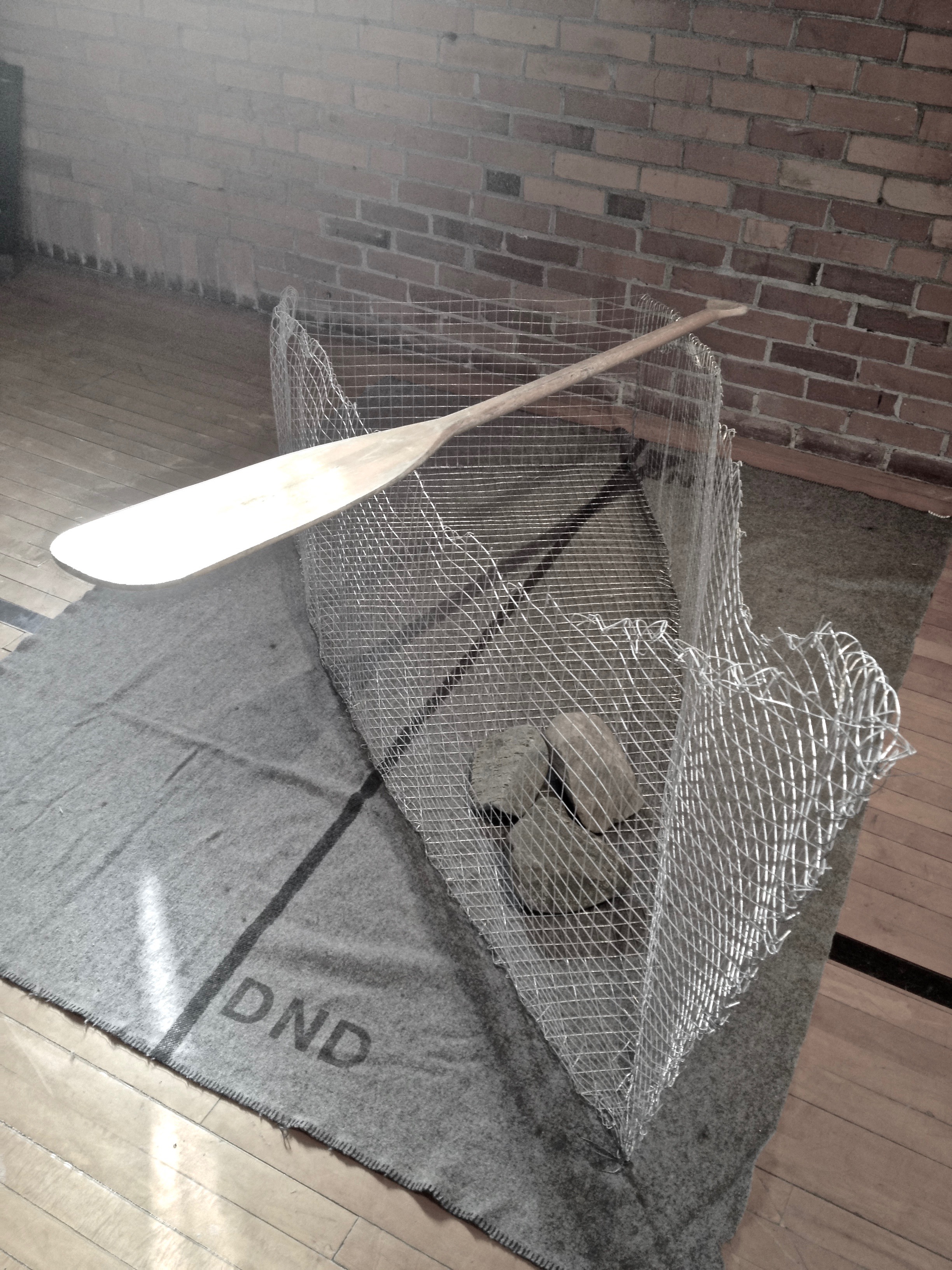 Breathing Room  – Video, Sculpture, and Sound Installation – 2012
For this piece I built a four-sided room with a door in the middle of the gallery space. Videos were projected on all four external walls of the room. The door to the space was locked, and from inside the locked room a recording of breathing could be heard emanating from the room. The videos showed people breathing. Each person is alone in their video segment. On the door is projected footage of someone looking through a peephole, but from the side where they can be observed but would be unable to see the observer. Below are video clips from the projected footage. 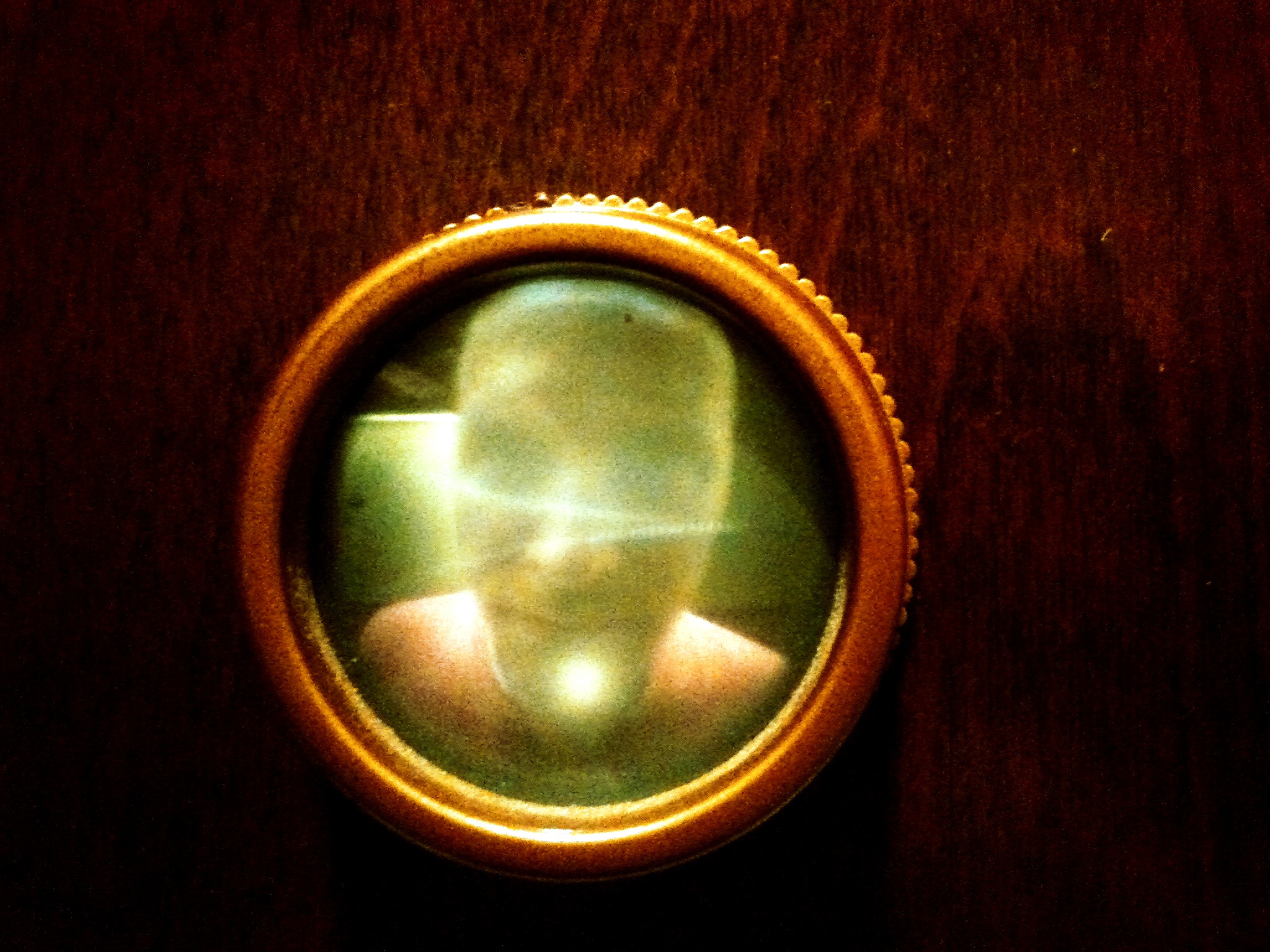 Conversation Piece – Video Installation and Sculpture- 2011
For this piece I filmed several deeply engaged conversations between people. I then edited out all of the talking so all that remained were the silences, glances, and facial expressions between words. 60-minute conversations were generally reduced to approximately 10 minutes or less. I displayed the footage from a television placed on a fully set dinner table. These are video clips from the footage I used. 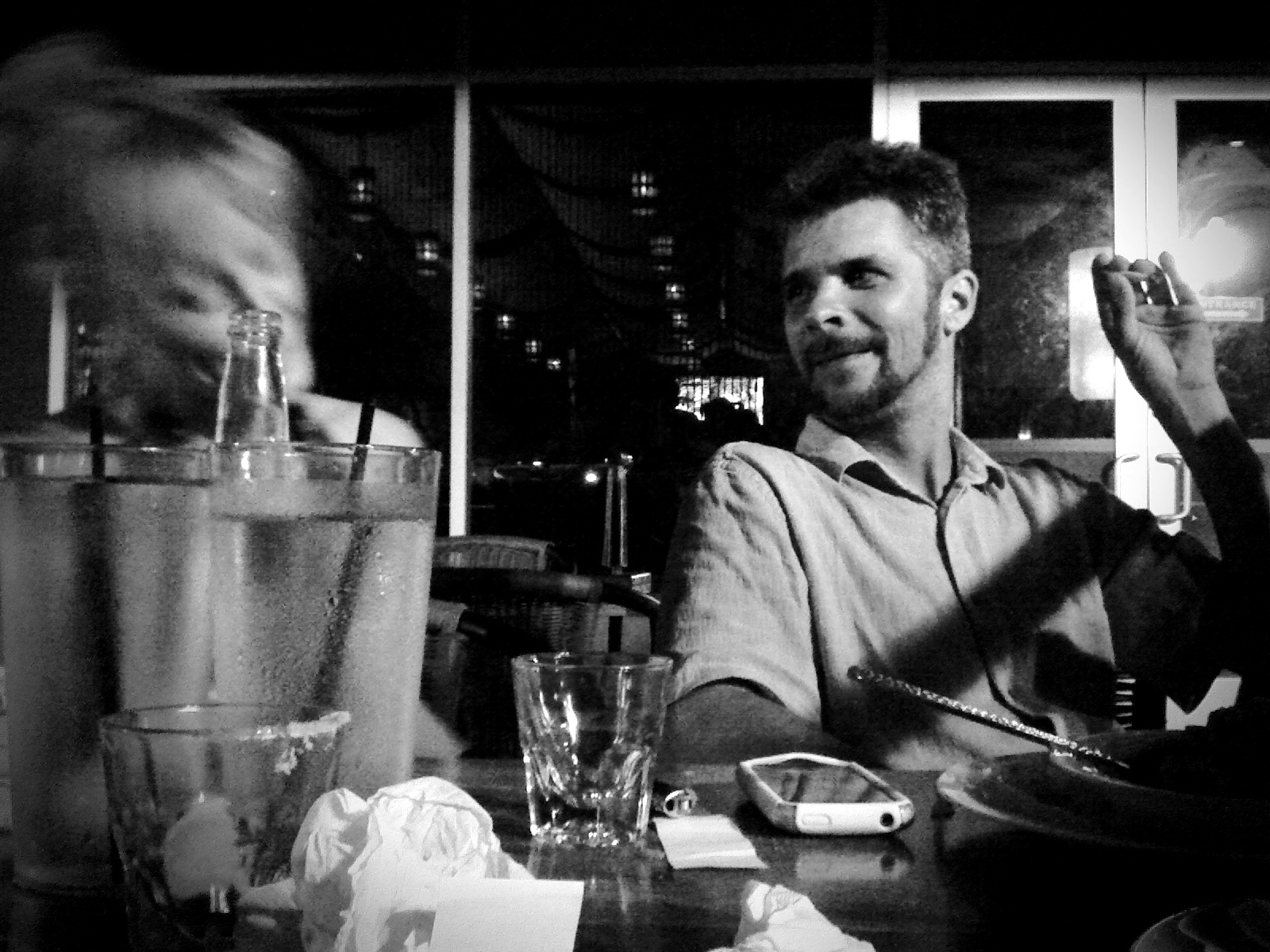 942 Days – Installation/Performance Art – 2009
This piece included a live musical and dance performance. For 942 days I documented, based on the news, a daily birth and a daily death. Every piece of paper pinned to the wall signified those comings and goings. The audience was encouraged to pin papers signifying births and deaths that were relevant to them. 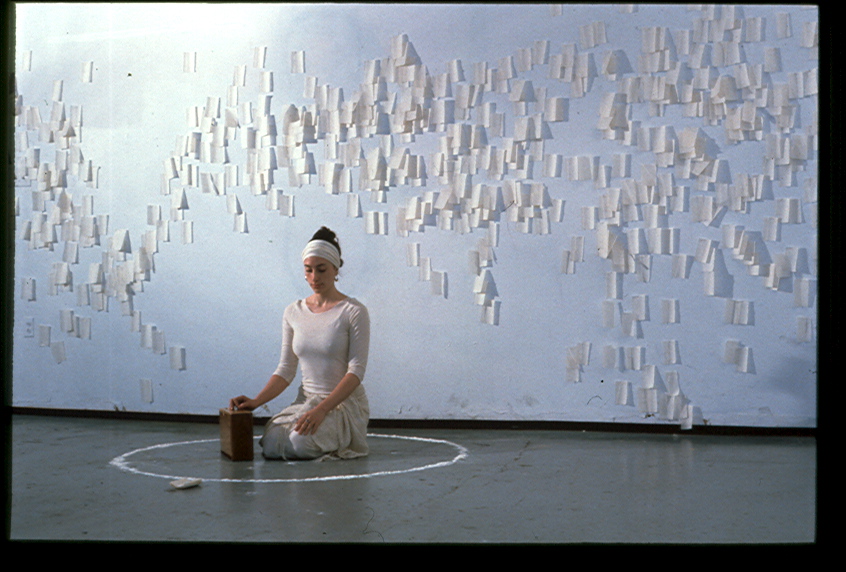 Paper House – Sculpture, drawing, performance – 2009
For this piece I did drawings of neighbors (unbeknownst to them) based upon how I could see them through their windows from my own apartment. These drawings were then transferred onto rice paper, which I mounted onto a wooden house sculpture I had built. I then did a live performance in which I went into the house structure, removed my clothes, and performed a musical piece. After the musical piece I put my clothes back on and emerged in a ‘normal’ state as if nothing had happened. 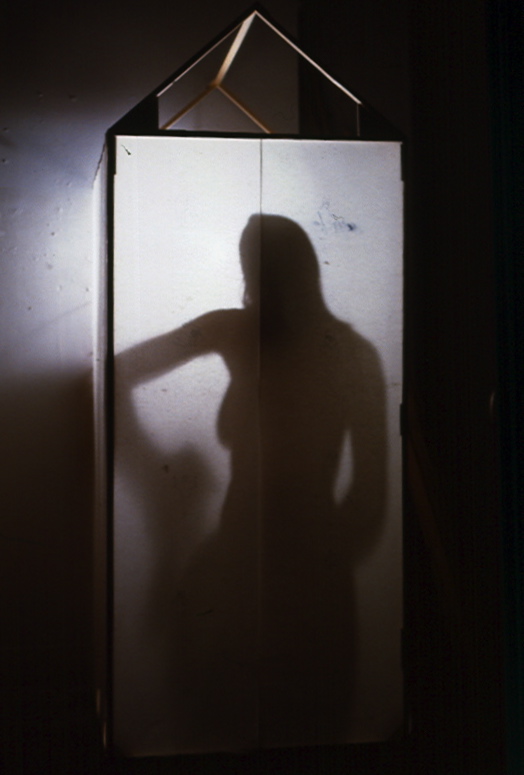 Paper Houses – Sculpture, drawing, performance – 2009
This piece followed a similar structure as ‘Paper House’. For this I was able to also bring forward two other female performers. This piece included improvised storytelling, dance, and sound performance. These elements were done interactively between myself and the other two performers, but all three of us remained in our separate structures. 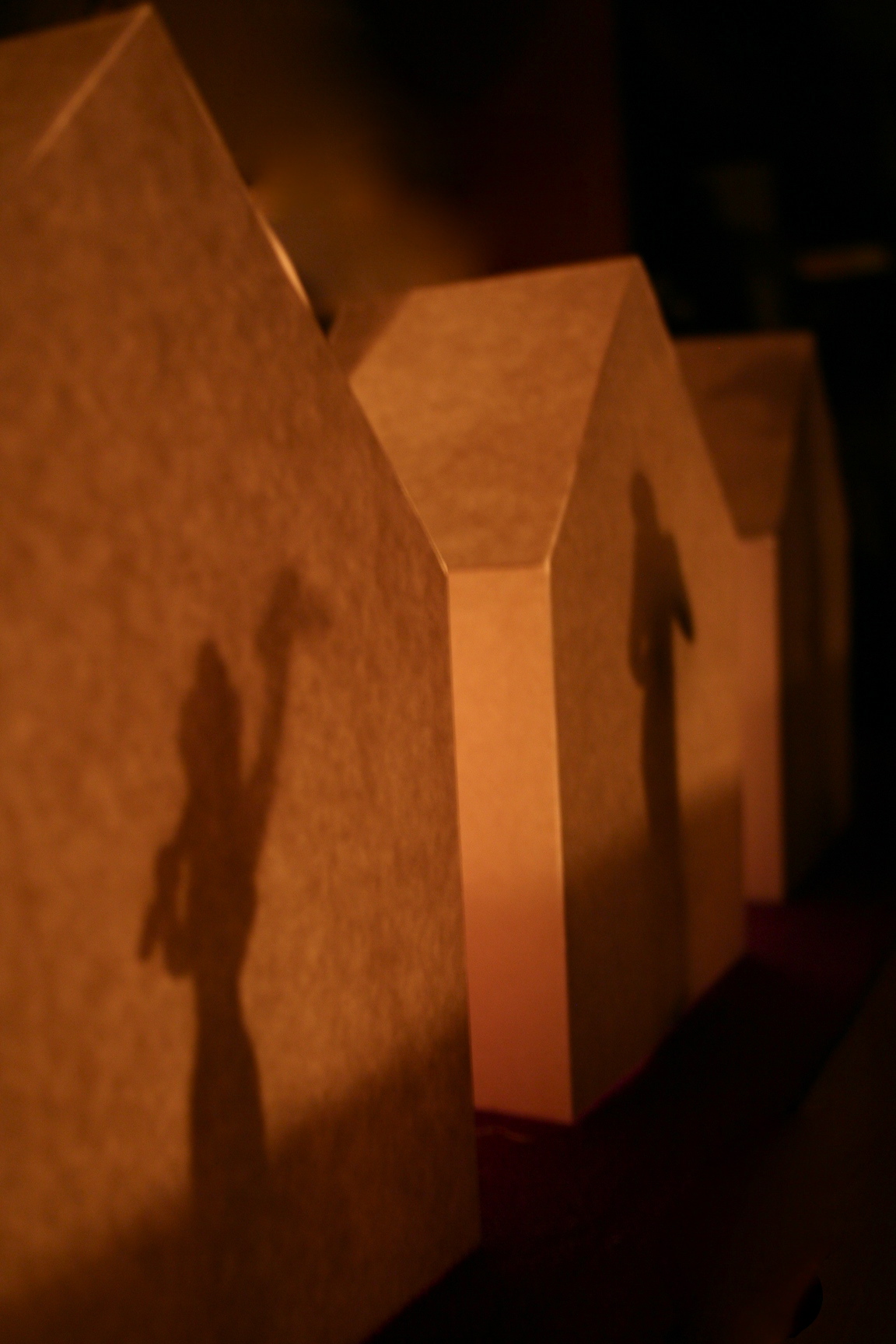